In Deepak Chopra's Seven Spiritual Laws of Success, there is a Law for each day of the week. Monday is for the Law of Giving. He writes, "Today, bring whoever you encounter a gift: a compliment or flower. Gratefully receive gifts. Keep wealth circulating by giving and receiving care, affection, appreciation and love."

You don't have to practice yoga, asana or otherwise, to see the power in this. One might at first think all the benefits would be in what the other person receives. But it very much is in the giving where the power resides.

My husband does not practice yoga, at least not asana. However, he has been studying mindfulness through the lens of Stoicism, by reading Marcus Aurelius' "Meditations" and listening to podcasts like the Daily Stoic. During our morning chats (however brief in our busy-ness) we find like-minded intersection on mindfulness topics like: putting space between stimuli and reaction, and comparing perception versus observation.

As an introvert his internal struggles often lend themselves toward rumination, and that can turn toward darkness and even depression. He shared with me recently something he does that is quite yoga-like, without him having studied the Sutras, or Eight Limbs at all.

He said that when he feels that downward spiral starting (especially at work), he takes a break, gets up, and finds someone to give positive feedback, like, "You did a good job today." I asked him how this helps, to get his analysis. He said, it takes him out of his own head, and he feels better making someone else feel good.

I've been trying to use the language of yoga to describe the process, and so far I've come up with this:
Perhaps someone out there has another way of analyzinng in terms of philosophy, but the gist of it is that the mindful approach, the desire to change, and willingness to create that change all result in a shift in energy. In sum, his perception of his mental state improves, so even if the stressors are the same, he has put some space between himself and his reaction to them. That space includes a positive energetic exchange with another person.

The present is a gift. We have that to give to ourselves. Enjoy your day, enjoy your yoga. 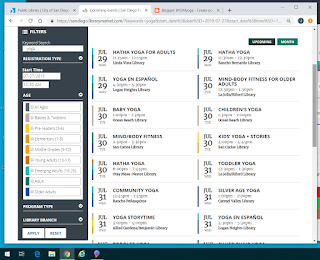 Point your browser at https://sandiego.librarymarket.com/, select your branches (or ALL), and on the filter page type the search term "yoga" and APPLY.

Looking for classes outside the city, from Alpine to Oceanside, Chula Vista to Poway? 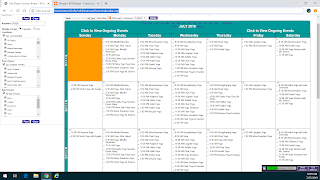 Either start at SDCL.org and click events, or route directly to http://host.evanced.info/sdcl/evanced/eventcalendar.asp. Select the branch(es) you want, type the search term "yoga," and click FIND.

Two Yoga Therapy Workshops: The Spine, and The Pelvis/Psoas