A Brief History of My Struggles & The 5 Second Rule


I won't repeat what Mel Robbins said, but I will give an example of how the distilled down version of it saved me from a meltdown the other day. But first, my whole life story (leaving out childhood trauma, etc. and sticking with things relevant to one story line).


Meltdown? You? A yogi? Oh yes. With a lifelong struggle with depression (starting before I even hit puberty but went undiagnosed) to 35 years with an eating disorder (now in a state of "constant recovery) my mental meltdowns might not include slamming doors (but they have), or hitting my child (they have NOT), street fighting (also, NO) or public hate speeches (*ahem*) but they have included self-harm and fits of self-directed anger and crying.


When I was 13 I was so frustrated by some argument with my mom that I grabbed the Bic razor in the shower and drew it across the top of my head. My Mom was horrified when I showed her, not as an independent "HAHA" maneuver but a "ohmigard what have a done I have scared/scarred myself" admission.


When I was 15 I started what was a seemingly harmless habit of vomiting up my food in an attempt to lose weight. Which turned into a "eat everything in sight like boxes of cereal loaves of bread sticks of butter and all the leftovers in the fridge" and then vomit to "cheat" the system (digestive and otherwise). I also used that technique to binge drink but more frequently than not the vomiting was from over-indulgence in alcohol and hardly intended.


At 19 I was busted by a friend  who told my mom and that put me into therapy. Where I talked a good game but had little interest in stopping that behavior because it a) was a huge release; and b) it was my only way to even remotely try to control gaining weight. Which didn't work because I went from 115 to 144 pounds in college and my face was swollen all the time.


I wanted to be normal, pretty, thin, smart, accomplished, and easy going, but instead I was a mess. And some part of me wanted pity for being that mess, because in some twisted way I thought that was the only way I would be deserving of attention. Which is how I "earned" my first sadistic and manic boyfriend that took advantage of this pathetic-ness and used it to fuel his own egomaniacal need for adoration. To which I complied with protest and then whimper, and then, nothing. When he cheated on me, after begging for reconciliation (including posted a BILLBOARD - the shame of it all), I was angry enough to realize that it wasn't ME that failed, but I still didn't have a grip on who I was and how to stop the self-deprecating behavior.


At 21 I had a nervous breakdown and was taken home from my repeated last year of college. I graduated remotely, thankfully, somehow but I still have nightmares of not finished.


I confessed my mental issues to my next boyfriend (but in error not even to my closest friends which would have been a far greater support system), and after 4 years he convinced me to try medication. The effect was profound. I finally HAD A GRIP on my mental state, and I could enjoy food without terror. I put healthy things in and everything started working properly. I started progressing at my job, being less distracted. But I was too dependent on the relationship, and when we hit the "I will never marry you" point, I was devastated. At first. Because, now,  something shifted - I had that "I don't need this shit" moment. And I had an inner strength that I had never experienced before.


A few months later, I stopped drinking (after a particularly embarrassing experience). And that combined with the medication, perhaps, was helping me find my own way in the world finally as a 27 year old. By the time I turned 28 and saw the New Year, though, my lack of true impulse control had me married, moving out of state, and headed into 10 years of bad behavior including rampant alcohol and marijuana use, and battling with the eating disorder in less desperate but nonetheless still troubling way. Result? I developed a horrible auto-immune disorder that swept my feet out from under me and made my bones and muscles ache to the point where I had to fight for people to believe that it was real. Luckily I had a great job and great friends (that I felt like I was lying to but now I have for the most part leveled with and improved our relationships greatly) to help me draw a rough path on the hardscrabble road down which I had chosen to stumble.


One of these good friends suggested YOGA. Ok, it's not the panacea I just made it out to be, but it WAS A START. AGAIN I stopped drinking alcohol. That marriage ended, and because I was starting to figure out what made ME tick and find room to let go of anger, it ended much more amicable and with far less resentment that what might have happened under other circumstances.


AGAIN I was seeing a therapist and talking about what I was doing rather than hiding it. I was in a healthy relationship with someone that liked me for my wit, my sassiness, my smarts, my partnership, and not just for how I fed his ego. I had space to work on myself. I could breathe.


And we had a child. My pregnancy was the most amazing experience where suddenly being completely beholden to another person was a GOOD AND FULFILLING thing. Being out of control was ok because I could ride through it and witness it from a different state of mind. I had many friends with which I could share the experience and I learned to talk about what was troubling to me instead of just hiding.


Post-partum was another story but the depression brought with it exhaustion and feelings of failure that didn't incite me to binge and purge, but just cry, and sleep. But I had yoga - I had my tribe, I had a partner that GOT that it was hard.


Fast forward to today. My son is almost 8. My relationship is in it's 9th year of legality (and 13th in partnership). I take my yoga learnings and try to translate them to other people so they can try to find their own way through their own minds and bodies. I love what I do; I don't even call people that I teach yoga clients - I call them friends. And honestly, I believe that they are. So much that yesterday I put it all out on the table for them, telling THEM about my battle with depression and food, and how I try to help myself work through the struggles.


Addiction, depression - they don't come in one form. But what I have found that speaks to me out of the yoga principles is the idea of putting some space between some stimulus and your reaction to it. So if the impulse to (drink, gamble, smoke, self-harm, unleash unproductive anger) starts to tickle at your lizard brain, taking a breath AT THE VERY SECOND THAT YOU NOTICE IT can stimulate something for which Mel Robbins uses the term METACOGNITION. In essence, you bring your pre-frontal cortex (the thinking human brain) into play to distract/sideswipe the brain stem response mechanism and break that cycle of the bad habit/behavior.


I know I'm oversimplifying but here's what happened yesterday. I love carbohydrates, and sugar. It's part of our biology to crave them and have no "off" button for them so maybe that's one reason I have so much trouble to this day controlling my impulse to gorge on them.


(you can read about that here http://now.tufts.edu/articles/craving-brain and here http://www.huffingtonpost.com/maia-james/quitting-sugar_b_4116814.html and in this woman's books http://www.sarahwilson.com/)


We had leftover homemade chocolate cake with (drool) Italian buttercream icing from a friend's birthday. I have been having struggles with body image (as usual) but lately moreso with sugar cravings ever since I did a candida cleanse, got my system cleaned out, lost a few inches of bloat and a few lbs., and went off the meal plan - I just don't have the capacity to do "on the go" proper nutrition planning and I need to get back to following someone's plan to help me balance the boat so to speak.


Anyway, my son wanted a piece of cake, which I happily gave to him. And my lizard brain screamed CAKE CAKE CAKE CAKE and I started to cut a huge chunk to shove into my mouth, full knowing the sugar would make my stomach hurt and my head spin (hypoglycemia anyone) and mess up how I physically and psychologically felt all day.


And in that microsecond of hesitation I said to myself "FIVE!" and exhaled deeply. Slow exhales relax the nervous system (in short, they get parasympathetic on-line and keep a good CO2 ratio in the blood and do a positive massage of the vagus nerve).


And the impulse was gone. GONE. No joke, the lightening fast craving and urge to satisfy it had passed and I felt like you do when you have almost drop a glass but you catch it and then when your heart rate slows down you kinda smile and get proud of yourself? That kind of feeling, of satisfaction, of calm, of accomplishment.


I know all the while there are terrors going on in our world far more important than my struggle with food, but in that moment I felt like a MUCH better mother, better partner, more authentic yoga instructor because I was practicing when I preach, I was living my yoga OFF THE MAT.


One really really interesting part of this whole story is that I didn't come by the 5 Second Rule by myself. My husband, who does not practice traditional yoga (Asana, Pranayama, etc.) read Mel Robbins' book and was talking about it when I was particularly sad the day prior - the battle in my head of critique and submissive was just horrible and I was angry and miserable and feeling bloated and achy and disappointed and frustrated and he just asked me to sit down with him and told me about what he just read.


He imparted to me HIS "yoga off the mat." And Om Nama Shivaya Praise to the god you worships holy guacamole it worked. It really, in the moment, it just worked. No shaming voice in my head, no crying, just a little bit of "ahhhhhh I can do this."


I'll take it. Five seconds at a time.

A Taste of Yoga and Craft Beer/Cider - SUCCESS 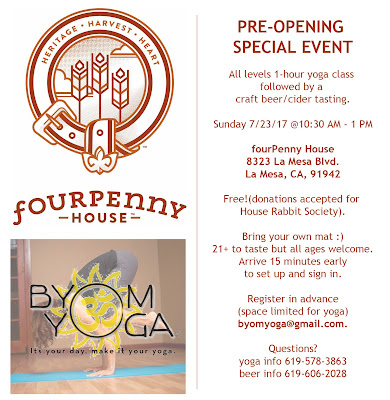 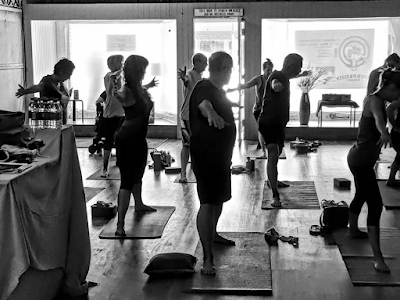