My son had an anxiety meltdown this morning because we had an orthodontist appointment and he was an hour late to school. He didn’t like the idea of coming into class late. We tried soft talking but he absolutely refused to do deep breathing with me; I tried quiet reasoning & I tried to tell him to imagine how happy his friends would be to see him and I told him I’d walk him into   Class. He curled himself into a ball in the school office and wouldn’t relax and regressed into a little boy reaching for the door and whimpering to be taken home.

He wasn’t in any pain he did say that he was a little bit tired I had given him children’s Advil because his teeth hurt a little bit . He hates to be late anywhere & we do our best to make sure that he’s on time  but whenever he’s even two minutes late he throws his hands in the air and says it’s not even worth going, so this morning’s hour behind schedule really threw him for a loop .

I tried rubbing his back and softly reminding him that going home wasn’t an option, so he needed to take some deep slow breath‘s until the part of his brain that was worried could let the calm 10 year old part of his brain take over. But I could see in his face that he absolutely wanted to stick with being upset.

As much as I understand that he wanted to be rescued from the situation I also knew that he needed to find a way out of it on his own. the woman in the office eventually came to get him and took him to the nurses station where he could gather his thoughts; he clung to my arms as she walked him away and he started to cry so with my heart breaking I told him I was proud of him and I knew he could be do it and he’d be OK and I’d see him at pick up time.

This happens once in a while when he’s tired and somehow gets it in his mind that he’s going to have a meltdown and I’m going to give in and let him stay home from school. I told him at the beginning of the year that we were going to work really hard to not have days like that because we did it quite a few times last year and he was a little bit older now and we were going to work on him getting through that anxiety. he uses language about it that shows he understands what’s going on and I’m not sure if he’s exploiting it or simply putting words to help explain it to me.

I’m looking for some suggestions to help me find a way to help him work through it so I don’t have to take him off campus? he can always take some time for himself there. I believe in mental health days but I think it’s important that he finds ways to work through this kind of anxiety then just always collapse into a heap and expect mom to rescue him. in the past as soon as I’ve said OK we stay home from school he’s back to normal and wants to play on the computer   , Run and jump and socialize so I know it’s just that walking to class and getting through the door that creates the stress.

Short story long maybe I need an appointment with the child psychologist for some skilled advice?     

1) I’m sorry that happened for both of you. Your instincts and intuition sound right on the mark to me. Some training specifically for emotion regulation for him, when his brain is getting hijacked would be helpful, in addition to the breathing that you wisely suggested. I’m not sure whether Lorraine Hobbs is in San Diego right now, but if she is, I’d recommend giving her a call. She was one of the therapists that adapted the Mindful Self Compassion course curriculum for the teenage brain. She also has expertise with younger kids. From my general common experience, I imagine trying different objects, like a favorite stone, or something to hold, to ground him in his body. Then the soles of his feet, then his breathing. Poor sweetheart, anxiety is a bitch. But the resilience he is building by figuring out he can let it move through him and function where he is supposed to be is invaluable. You don’t want the pattern of anxiety to getting out of the situation by going home to get repeated and repeated, laying down that neural path. All your yoga training is a gift for both of you. I hope you give yourself a lot of love today. It’s so tough being a mom.

2) I have never been a 10 year old boy, but I have had similar anxiety, about being late. For me it was not exactly about the idea of being late, but rather being so conspicuously the center of attention on arrival. It was socially based. There were many times I managed to stay home, play sick and fool my parents starting at an early age. It is in our nature to avoid unpleasant sensations.That being said, I always think it’s a good idea to seek a professional point of view where kids are concerned, as long at it doesn’t just end in a prescription. This also being said by a kidless person.

3)  I can relate to this hard enough to hurt. I had two years of one of my children not being able to get out of the car for school without crying. It was insanely stressful for both of us. I often arrived at work crying. We ended up with two things that helped. (And I realize this isn't the same exactly as the anxiety for being late...ours was a general daily thing). We came up with a routine in the car to look at images on my phone together of the child's choice .... Mt. Everest and lowriders. Lol. Then, I had enlisted the help of the school psychologist and my child was allowed to go to her office first. Sit. Chat. Relax. Focus. Without me. It worked eventually. XO

4) As a school nurse I saw several students over the years with this type of social anxiety. I created a chillax space in my office where kids can come and just “be” until they could relax enough to try some calming down methods. When a person is in the middle of an anxiety attack, it is sometimes impossible to attempt deep breaths etc. I know, because I have an anxiety disorder (which is now controlled through medication, and, no I am not suggesting medicating your son). I didn’t start meds until I was 60. 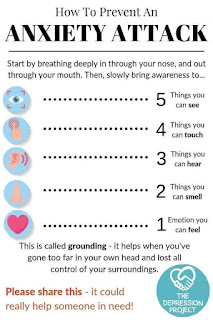 6)  I suggest a orienting approach, might be able to practice it as a game. It's a little like the post above mine, but in contrast I would say do not coach the breathing. For me and others, trying to focus on breath increases anxiety

7) That's a bummer. In my experience, I would say the best strategy is to have a little check in with the teachers (and if he has one, a school counselor). This would give him the sense of security knowing that there is a team, working together to support emotional regulation issues.

8) Very common problem with many people and children! CBT is proven to be very effective, but not a quick fix by any means. http://www.cw.bc.ca/library/pdf/pamphlets/Mighty%20Moe1.pdf and https://childmind.org/.../behavioral-treatment-kids.../amp/

9) Social stories with the support of a social worker or psychologist could help with coping strategies. Hugs

10) Does he see the school psychologist? This can be a big help. Not only can work with him on strategies, recognizing and coping with feelings, but it helps the child to know they have someone safe and supportive at the school when these things come up.

11)  There are a lot of great suggestions in these posts. First, kudos to you for holding your ground but in a supportive way. I’m sure it was hard. I like “How to Prevent Anxiety Attacks” post. Another program or concept is the “Zones of Regulation” by Leah Kuypers. Also, nothing wrong with getting advice from the school psych, social worker or counselor.

12) You did everything right IMO. I think it’s good to reinforce it’s okay to do things even when we are upset or anxious. That it might turn out okay if we don’t retreat, hide, or avoid. That life is about feeling those feelings and still moving forward. The day might get better, stay the same, or sometime get worse. But it’s just a day, just a moment, just a very strong wave of emotion. It’s possible to move forward and completely feel like you dont want to or can’t. This is what I wish I had been taught. That my emotions were a) okay and valid b) that I could still do the hard thing.