Yoga in A Different Type of Community

I'm excited that I'm teaching yoga with a new group of friends. I've actually never met them in person; we follow one another on various social media platforms. But the big thing we have in common is a love for a group of comedians under the WellRed Comedy umbrella. You might think, "So, you're all just comic nerds or super fans?" You'd be mostly right, but we've become quite a bit more than that.

With stand-up comedy ground to a halt due to COVID restrictions, this particular subset of American comics decided they would take their craft online. In addition to podcasts, they had Zoom comedy shows. The gents found out the community they were fostering was more cohesive than just a random group of fans. Some of the folks had started a big Facebook group; pre-pandemic they even would travel to go to shows with one another. Now, they were even having "coffee talks" on Zoom on Sundays and started an online gaming group! 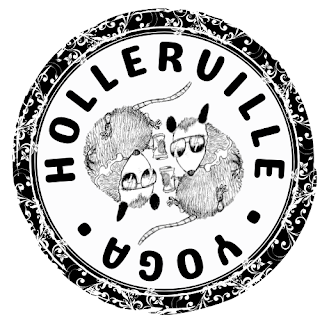 We started to recognize each other in audiences and would chat via text while shows ran. We connected with each other on multiple social media platforms, and exchanged personals. The relationships have been forged such that we support each other when someone needs help, either emotional or even financial. People have been inspired to create mutual aid groups, volunteer for political actions, and been helped writing resumes and moving from one town to another. The hosts have regular bi-weekly "shows" that give artists a chance to show off their wares whether that be telling jokes, singing/songwriting, working tarot, or doing magic. Some podcast content is behind the Patreon paywall, much is free, and as always, the audience (the fans) is encouraged to tip any contributing artist (via venmo, zelle, paypal) for support.

We have veterans, folks from every walk of life, those in the "redneck" community and those that have been accepted and "red adjacent" like myself. The community as of tonight started having virtual art gallery shows that features works from folks that do in-home woodworking, to acrylic painting, to 40-foot towers of children's toys http://www.karlunnasch.com/. There's a group effort to write an origin story of the community (it's heavy with quasi-Appalachian folklore and dialect). We discuss politics, spread the word on activism and Mutual Aid (we have experts in the profession), and do fundraisers.

Now, we have something I can contribute more than just dollars and a laughing voice. Another teacher and I collaborated to offer YOGA to the community. Anyone who is a Patreon subscriber to https://www.patreon.com/abiscuit/posts at the basic level ($3/month) can listen to the lion's share of the podcasts, get to join in on the Friday night "blue" shows, and also can tune in for what we call Hollerville Yoga. We do mat-based yoga, and Jessica and I alternate weeks. We have a little bit of flow, a little bit of meditation, and a lot of fun. What makes it so very special is that it grew organically out of this community. Of course it's open to anyone who wants to be part of it, with the only "gate" being the paywall. And true to form of people to whom I am not inexplicably drawn, no one will be turned away for inability to pay; if the basic subscription rate for Patreon is too much, the hosts will waive the fee to make sure they reach everyone who wants can be a part. Same goes for yoga.