Day 20 of 21: Change Your Perspective 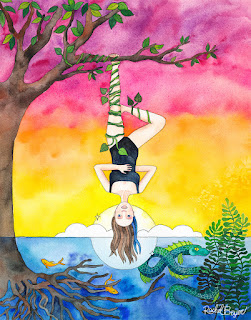 The Hanged Man is the card of ultimate surrender, of being suspended in time and of martyrdom and sacrifice to the greater good. He is hanging upside-down, viewing the world from a completely different perspective, and his facial expression is calm and serene, suggesting that he is in this hanging position by his own choice. He has a halo around his head, symbolizing new insight, awareness and enlightenment. His right foot is bound to the tree, but his left foot remains free, bent at the knee and tucked in behind his right leg. His arms are bent, with hands held behind his back, forming an inverted triangle. There is a halo burning brightly around the hanged man's head, signifying a higher learning or an enlightenment.

What does this represent? Wisdom, circumspection, discernment, trials, sacrifice, intuition, divination, prophecy. It's opposite is Selfishness, the crowd, body politic.

Why have I posted this image for the penultimate day of my 21 day challenge? Because as I near it's end, I realize it's all about changing perspective. In order to get that alternate view, you have to know where you are - you have to center to get a bead. Once you know where you are, you can see where you've been, and then make decisions about where you want to go.

For 20 days (ish) now I've been writing about practicing yoga and meditation, and how they relate to me personally, how I've been instructing in my classes and reflecting back on new techniques and lingering thoughts. As much as I started out with intent for this to be "life changing" at some point I was just going with the flow, waiting for it to end because it was just another task to have to complete. It's not that I don't think about yoga every day, it's just that my thoughts aren't always noteworthy for sharing. Yet I committed to putting them into the blogosphere for the sake of argument, to fulfill a promise, and to see what insight I might divine from it.

Like some of my classes on Zoom, with the blog, there's an audience that doesn't really get to chime in one way or the other except in after comments. Essentially I'm journaling, and it feels empty sometimes, like I'm a lone semantic alchemist trying to conjure golden expressions of genius out of random metal words and phrases.

That being said, during this process I have been partaking in two different type of learning. I have this Yoga for Mental Health training with Cindy Beers (https://cindybeers.com/events/) where I have been immersed in lessons on mindfulness to help recognize, alleviate, and work with depression, PTSD and stress within the boundaries of a yoga practice.  I also have started on a path to some sort of certification in biological/exercise science, and have enrolled in a Introduction to Kinesiology class. Going back to formal "college" was huge in conquering my fear and anxiety that almost prevented me from graduating back in 1988 (but that's a story for another time).

The 21-day yoga challenge didn't necessarily make me better at yoga pose, or an expert at meditation, but it led me to dive more deeply into learning. Something sparked that quest for higher knowledge, and fueled the confidence to finally enroll.

The Tarot card above (which traditionally would be shown with a man) kept popping up in my mind the past week or two, and when I was trying to find just the right picture this one came up. I think it's beautiful and represents where I am. People often see images like this in Tarot and think "Oh, that's bad!" If you look more deeply at the image you can absolutely see that even though the person seems bound and "hung" they are not in distress at all. It occurred to me that they are in fact holding tree pose, with their hands on the back and front of their power center (third chakra), and hanging not by an external force, but with strength of their own leg from the tree. Tree pose, one representing growth, strength, nature, connectedness. In this position, upside down, perhaps it could mean the tree can grow where it chooses, even upside down. Just because circumstances are odd, doesn't mean that you can't thrive; you just need to get centered.

The scene isn't gruesome, but serene, acrobatic, and even calm. Not bad at all. Tarot cards like Death and The Fool likewise aren't bad but depict something about change. They aren't meant to frighten or disgust but help the reader or even casual observer look at things with a different perspective.

So that's where I am with this practice. Thinking about how these past 20 days have given me insight to what is really important, and how I might proceed to stay true to what I need. Next time I need a reset, I'll remember to stand on my head!